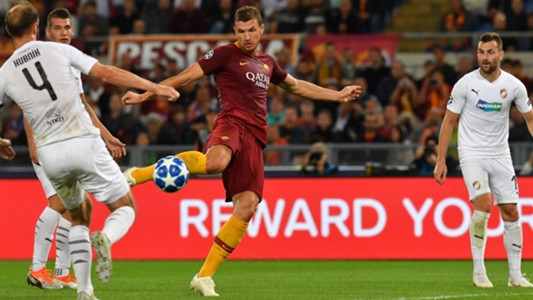 The long wait is over – club football’s greatest competition is back!

But who will lead his club to glory with the most impressive performance this week?

Who will rise up above the rest and be crowned the UEFA Champions League Player of the Week, sponsored by Banco Santander?

Will Roma striker Edin Dzeko inspire his side past reigning champions Real Madrid? With five goals and two assists already, nobody has been involved in more goals than he has in this year’s competition.

The UEFA Champions League returns tonight! Who will emerge as a Player of the Week contender on Matchday 5?
Posted by Football Santander on Tuesday, November 27, 2018

Or will John Stones help Manchester City pass their way through Lyon by keeping up his 96 per cent pass completion rate?

AEK Athens’ goalkeeper Vasilios Barkas has also been impressive with his distribution, completing a competition-best 54 accurate long passes so far, and he will be key to his side’s chances against Ajax.

Young Boys head to Old Trafford hoping to give Manchester United the run-around, but holding midfielder Nemanja Matic will be well prepared – he’s covered 45.6km in four UCL matches this season, more than anyone else in Group H.

Voting for Player of the Week opens on Thursday .