As we reach the hectic festive schedule in the Premier League, strikers have the chance to build a run of form heading into 2013 and emerge as frontrunners for the Golden Boot.

Luis Suarez leads the way in the scoring table with 10 goals this season, while Robin van Persie is right behind the Liverpool forward with one strike less. Despite Newcastle United’s poor form, Demba Ba sits in third with eight goals, while Swansea City’s attacking midfielder Michu boasts the same return as the Senegal international.

Here’s Goal.com’s look at the players who are in with a chance of scooping the Golden Boot this term. 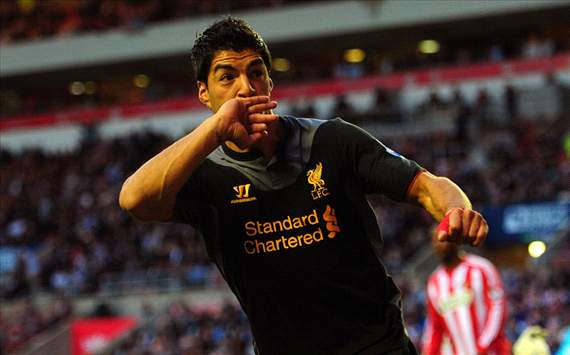 Despite Liverpool’s mediocre start to the season, Luis Suarez’s campaign has begun in blistering fashion as the Uruguay international currently tops the Premier League scoring charts with 10 goals. Suarez has struck five times in his last six league appearances and looks on course to smash last term’s tally of 11 goals. With the 25-year-old also averaging six shots per game – the highest of any player in the league – it is likely he will be a strong contender for the Golden Boot this season.

Robin van Persie sits just behind Suarez in the Golden Boot race with nine goals to his name this term. The Netherlands international had gone three Premier League games without a goal before netting against West Ham on Wednesday, which was his longest spell without scoring in the league since March.

Demba Ba, perhaps surprisingly, sits third in the race with eight goals, although the Senegal international has netted just twice in his last six games, a record which mirrors the recent form of Newcastle United, who have lost their last four matches. 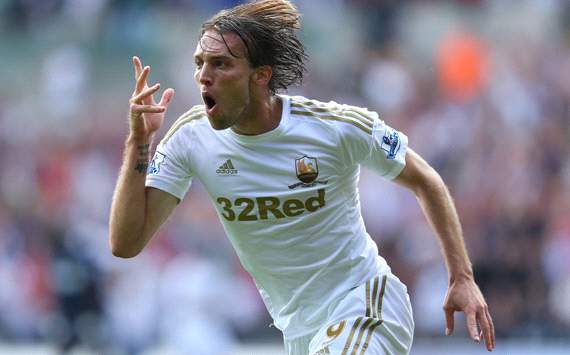 Michu sits alongside Ba on eight Premier League strikes this term and the Spaniard could be in with a shot of challenging the likes of Suarez and Van Persie if his form in front of goal continues. Against West Brom on Wednesday, Michu spearheaded Swansea City’s attack and returned with a goal and an assist to help his side to a 3-1 victory. The 26-year-old netted 15 times from an attacking-midfield position for Rayo Vallecano last season and judging by his swift acclimatisation to the Premier League, that impressive haul should be replicated this term.

Before Sunday’s double against West Ham, Jermain Defoe had not netted in the Premier League since the 4-2 defeat to Chelsea on October 20, but the Tottenham striker has seven goals this season and with Emmanuel Adebayor suspended for another match, the England international will be looking to boost his tally against Fulham in order to cement his place as Andre Villas-Boas’ first-choice forward ahead of the busy festive schedule.

Marouane Fellaini sits alongside Defoe on seven Premier League goals and having netted on his return from suspension against Arsenal on Wednesday, the Belgian looks as though he will be a continuous source of goals for Everton this campaign. Fellaini also averages 3.8 shots per game – the highest of any central midfielder in the top flight.

Carlos Tevez has been a victim of Roberto Mancini’s rotation policy over the past week as the Argentine featured for just 22 minutes in Manchester City’s goalless draw against Chelsea before being an unused substitute at Wigan on Wednesday. With only Sergio Aguero, who has one goal fewer than his compatriot, being handed regular playing time, Tevez’s hunt for the Golden Boot may prove difficult.

After scoring two goals inside 11 minutes as a substitute against West Brom in October, Edin Dzeko looked uncomfortable after being handed a starting berth in a wider position by Roberto Mancini at West Ham. The Bosnian has only been handed one start since his toothless display at Upton Park, and that was in the goalless draw against Chelsea on Sunday, and so he remains on six for the season.

With Van Persie headlining the goal charts at Manchester United, the top scorer for Sir Alex Ferguson’s side last season, Wayne Rooney, has found himself in a deeper position in order to provide support for the Netherlands international. As a result, Rooney has a return of just two goals in 10 appearances this season. Javier Hernandez has had even fewer minutes on the pitch than Rooney, but the Mexico international has netted five times this season. 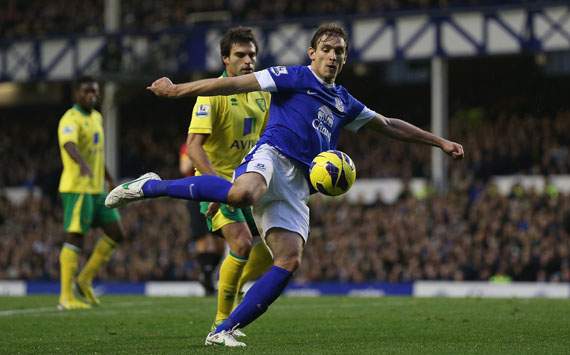 After an impressive start, Nikica Jelavic has been subdued of late as the Croatia international has found the net just once in his last six games. The 27-year-old has five for the season so far and while Everton are the team who have averaged the most shots per game in the Premier League, it may take another run of form in front of goal to see Jelavic contend for the Golden Boot.

In similar fashion to Jelavic, Steven Fletcher’s potency has diminished after an encouraging opening to the campaign. The Scotland international has six goals to his name this season but has found the net just once in his last six games. Since he is in a team who have averaged the fewest attempts at goal in the Premier League, the Sunderland forward looks an unlikely challenger to Suarez and Van Persie.

Southampton sit in the relegation places despite being on a run of four games without defeat and Nigel Adkins’ side will be reliant on goals from Rickie Lambert for their push to safety this term. The 30-year-old has six goals in 14 appearances so far.

Olivier Giroud appears to have found his feet in the Premier League after a low-key introduction to the Premier League. The France international has been in fine form for Arsenal, netting three goals in his last six games, but with four strikes overall this season, Giroud faces an uphill battle to challenge the league’s seasoned scorers.