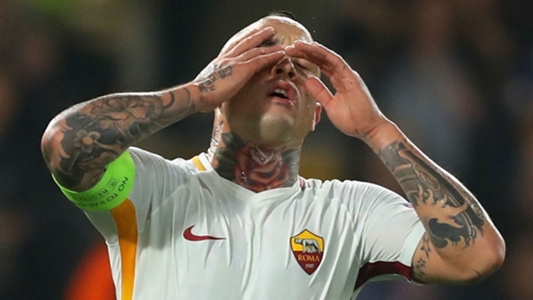 Radja Nainggolan could miss Roma’s Champions League quarter-final showdown with Barcelona after suffering what appeared to be a muscular injury against Bologna.

Nainggolan, a key figure in Eusebio Di Francesco’s midfield, limped out of Saturday’s Serie A clash after 16 minutes, clutching his right thigh.

It remains to be seen whether the 29-year-old – who was recalled to Roberto Martinez’s Belgium squad for the friendly win over Saudi Arabia – will be fit to feature in the first leg at Camp Nou on Wednesday.

Another concern for Di Francesco is winger Cengiz Under, who sat out the match against Bologna following a knee injury sustained on international duty with Turkey, although the youngster is expected to recover in time for the trip to Spain.

Top scorer Edin Dzeko, meanwhile, started on the bench at the Stadio Renato Dall’Ara, with Patrik Schick filling in up front.

Roma have never before made it beyond the quarter-final stage of the Champions League, so will be looking for all of their key men to be available.

Nainggolan certainly falls into that category, with his presence in the heart of midfield set to be vital as the Serie A outfit seek to contain Barca’s attacking threat.