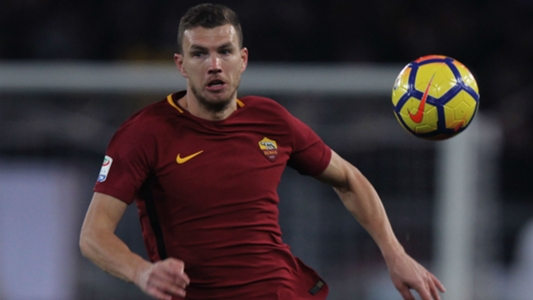 Roma are “very happy” they have managed to keep Edin Dzeko amid interest from Chelsea and plan to sign Sporting’s Jonathan Silva to replace Emerson, according to club general manager Mauro Baldissoni.

Bosnia-Herzegovina international Dzeko had been strongly linked with a move to Chelsea, with Antonio Conte eager to add more firepower in the shape of a striker who offers both physical presence and quality in front of goal.

But negotiations with Roma for Dzeko ultimately failed, with Chelsea now said to be targeting Arsenal’s Olivier Giroud, as Michy Batshuayi looks set for a loan move to Borussia Dortmund.

And Roma insist they were never in position which required them to sell anyone, even though left-back Emerson Palmieri, unlike Dzeko, did get his move to Chelsea.

“We are at January 31 and Roma have sold one player, yesterday [Emerson, on Tuesday],” Baldissoni told Radio 24.

“That is evidence that we do not need to sell, but we must take advantage of certain opportunities.

“We are nearly always in the Champions League, but if an unexpected bid comes in for a player like Dzeko which may be considered interesting, we have to evaluate it and see how the money could be used to remain competitive.

“The offer has to be taken into consideration. It is clear that if we needed to sell him [Dzeko], then we would have done so, but we stuck to our asking price because that represented an interesting opportunity.

“We are very happy that Dzeko will stay. If he had gone then it would’ve been up to the sporting management to find other solutions which kept us equally competitive.”

Baldissoni: “If Roma had needed to sell Edin Dzeko, we could have pushed to do so. Instead, the club maintained a clear position. We did not panic, we did not try to accelerate negotiations. Edin is a great player and we are happy that he is staying here.”
#ASRomapic.twitter.com/r8b74mSf4m
— AS Roma English (@ASRomaEN) January 31, 2018

As for Roma’s deadline-day dealings, Baldissoni expects just the single arrival, as he confirmed Silva has been at the club for a medical with the view to replacing Emerson.

The Argentine left-back is currently at Sporting, having spent two years on loan at Buenos Aires giants Boca Juniors prior to returning to Portugal.

“At the moment we’re talking about a team that has sold Emerson Palmieri but replaced him with Jonathan Silva, who has played the Champions League and made the final of the Copa Libertadores,” Baldissoni said.

“We haven’t weakened ourselves. I don’t think we will do much else, in the sense that he [Silva] has arrived to complete his medical examinations and he will replace Emerson.

“We will complete that deal and the sporting director is always on alert on the deadline day – situations can always occur, but there are no particular upheavals expected.”