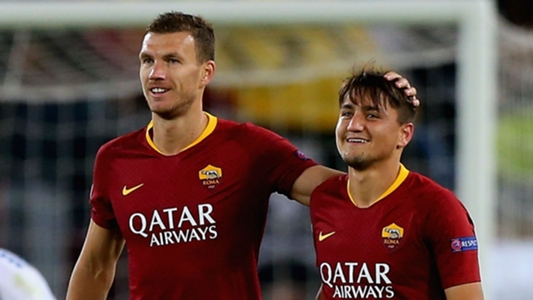 Eusebio Di Francesco singled out Edin Dzeko for individual praise after the Roma striker scored twice and set up another in the 3-0 Champions League win over CSKA Moscow.

Dzeko netted his fourth and fifth goals of the Champions League campaign in the space of 13 first-half minutes at Stadio Olimpico, before teeing up Cengiz Under after the interval.

It marked a timely return to form for Dzeko, who has now been directly involved in 16 goals in his last 14 Champions League appearances, following an abysmal showing by Roma’s attack in a 2-0 Serie A defeat to SPAL.

And Roma head coach Di Francesco was delighted with his side’s reaction, and Dzeko’s display in particular.

“If he’d scored [against SPAL] that would have been even better,” Di Francesco said.

“I must say, he’s an extraordinary player, and not just in terms of his finishing – he gets the team playing, brings the ball down and produces good service for his team-mates.

“He’s a fantastic professional, his pre-match preparations are always spot-on. When he has a bad game he might appear lethargic, but he does well when he’s determined.

“There were things I wasn’t happy with against SPAL, some occasions where focus was lacking. That’s football, you can never let your guard down.

“We showed a lot of good things, including the ability to dig in. CSKA are good between the lines but we found our rhythm, producing some good play and creating chances.”

“This was a great reaction after losing badly on Saturday in this stadium,” De Rossi told UEFA.com.

“It’s never easy to come back here after a defeat and show the personality to win so clearly. We were good, now let’s try to be good more often.”

CSKA coach Viktor Goncharenko, meanwhile, insisted that his side – who sit third in Group G on four points – can take positives from their performance.

“I don’t want to focus on negative things. We are moving forward, our young team is getting an invaluable experience by playing in these sort of games,” he told UEFA.com.

“Surely, it will help us when we face Roma in Moscow. We’ll do our homework.”