The brooding Bosnian, perennially in the shadows of his Manchester City strike partner, carried his side to the title last season – and now he can carry them into the last 16

Manchester City’s mission impossible became significantly more difficult after Sergio Aguero limped out of the victory over Everton with a knee ligament injury – though, in truth, progression to the Champions League knockout stages would have been out of reach long before Wednesday’s trip to Rome were it not for his emphatic hat-trick against Bayern Munich.

When asked where City would be without the electric Argentine afterwards, skipper Vincent Kompany answered: “I don’t know… he’s our special player.” Now they are about to find out just how special he really is.

Aguero has scored or assisted a massive 59 per cent of City’s Premier League and Champions League goals this season, an astonishing reliance on one player given the millions it cost to assemble the squad. Domestically, only West Brom and QPR can claim to be more reliant on a single individual’s strikes. In fact, due to injuries and suspensions, the only player Manuel Pellegrini can call upon against Roma who has even scored in Europe this season is James Milner.

Without their talisman, City’s chances of qualification look bleak, even accounting for the Giallorossi’s recent blip against Sassuolo which ended a run of seven straight home wins in Serie A. Their captain is a doubt, their imposing midfield enforcer is suspended and the striker who has kept their slim hopes of progressing to the next round alive is sidelined. But City have been here before.

Last season, Aguero, then second top scorer behind only Luis Suarez, picked up a calf injury in the 6-3 humbling of Arsenal – the first of a series of injuries that hampered his campaign and led into an indifferent World Cup. Stevan Jovetic was, similarly, blighted by niggles in his first year in England while Alvaro Negredo, a fearsome wrecking ball when alongside a fully fit Aguero, saw his strike rate and form wither without his partner in crime – now on loan at Valencia, he scored his first goal since January against Granada on Sunday.

TOPSCORERS | Only Toure and Aguero outscored Dzeko for Manchester City last season, though the majority of his goals came in the second half of the season
With City’s new-look strikeforce out of action or misfiring, it was the oh-so-often-maligned Edin Dzeko who was asked to take on the club’s goalscoring burden and reignite their title charge. The Bosnia-Herzegovina international was thought to be on his way out of Manchester during the summer of 2013, with a remodelling of the forward line Pellegrini’s first priority, and, seemingly ostracised, he completed 90 minutes just twice before Aguero’s first injury blow.

Dzeko has been hampered by criticism of him as an awkward leading man – less explosive and dynamic than his peers – as well as being worryingly accustomed to long barren spells, culpable of missing the clear-cut chances Aguero would usually devour and often appearing detached and devoid of confidence. At times he has a visible fragility, to his psyche more than anything else, which is a world apart from the unrelenting ferocity of his Argentine team-mate.

But when City needed him, he stepped up. Beginning with the only goal in a 1-0 victory over Crystal Palace at the end of December, he went on to score 13 times in the final 17 matches of the season. His haul in the second half of the campaign was unsurpassed by any player over the same period, while only Aguero and Wilfried Bony can claim to have scored more Premier League goals in 2014 – though Dzeko has racked up half as many minutes as the pair this term, once again relegated to understudy.

At times it felt as though Dzeko was dragging City through games singlehandedly – his double at Goodison Park stands out as a decisive moment in a seesawing title race – and, remarkably, he has won exactly the same number of points for City (through winning or equalising goals) as his much more revered team-mate Aguero (both 32), though the latter’s winning goals have had a tendency to carry more weight and, as a result, more vowels. 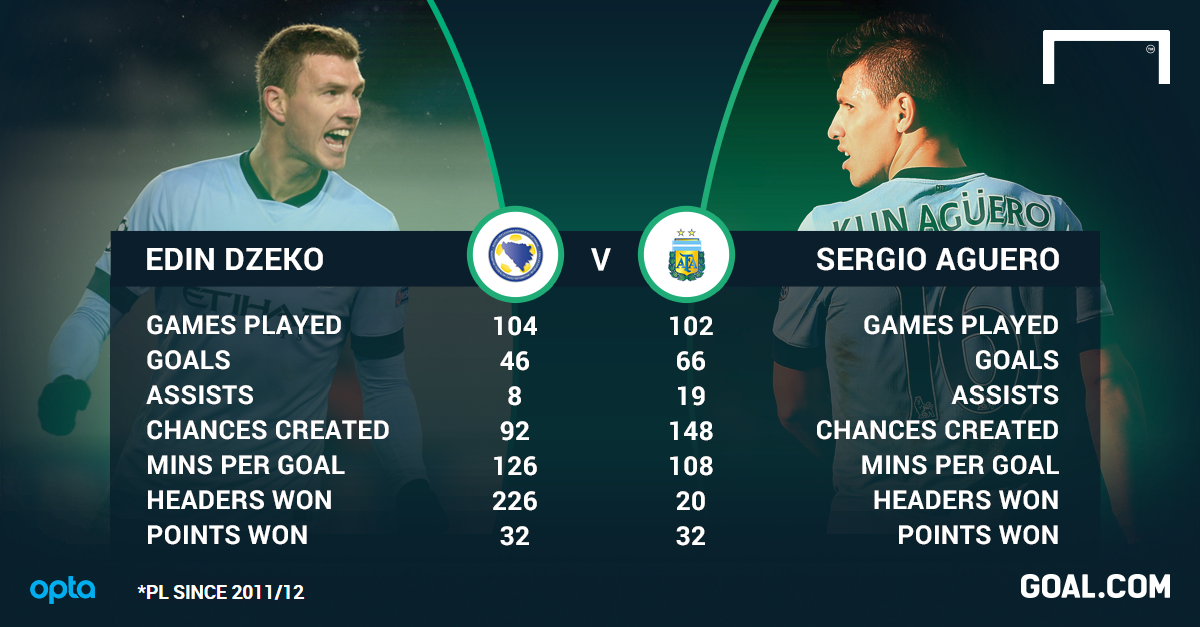 Now, yet again, he is likely to be called upon. Rushed back to full fitness after picking up a “very serious calf injury” in mid-November, he was initially left on the bench in favour of teenager Jose Pozo against Everton, his powder kept dry for the trip to Rome where he will look to step out of Aguero’s shadow once more.

The former Atletico Madrid man has shown he is more than capable of playing as a lone frontman, but Dzeko is unquestionably the more natural target man. While the rest of the City side look to play in the Argentine, they can play off the Bosnian; he offers a strong, sturdy base to build attacks around, while his heading ability – he won more aerial duels per game than any of his team-mates last season – should test the Roma back-line.

Only four teams have won fewer aerial duels in the Champions League this season than the Italians, and only five have given up more headed efforts on goal. In Bayern’s 7-1 victory at the Stadio Olimpico, the Germans enjoyed plenty of success raiding down the flanks and whipping in crosses (35 from open play alone across the two fixtures), while Robert Lewandowski – a striker not dissimilar to Dzeko – was on the end of one such delivery to head past Morgan De Sanctis.

CROSSING POWER | While Bayern routinely got in behind Roma, Man City played just two successful crosses in the final third against the Italians and will need their full-backs to get more involved
Roma’s full-backs, Ashley Cole in particular, looked punch-drunk that evening and Rudi Garcia has had little joy in nailing down his best back four. That disorganised defence fared little better against CSKA Moscow, where another cross was their undoing – this time it was Vasili Berezutski’s hopeful, floated ball that was inadequately dealt with. City managed just two successful open play crosses in the reverse fixture and must attempt to find Dzeko more often on Wednesday.

Aguero’s presence, and brilliance, often feels like it has handicapped Dzeko. As a partnership they have never looked entirely cohesive and he seems to thrive when on his own – a role he is only ever afforded when City’s main man is sidelined – while the presence of two strikers meant City were so often outnumbered in midfield, something Pellegrini was criticised for, and which Dzeko paid the price for.

That would also see Yaya Toure drop deeper, deprived of the freedom he thrives in behind the striker – unsurprisingly, he scores more regularly when Dzeko is in the side. The Ivory Coast star, of course, is unavailable for the final group game, though he could return to his imperious, goalscoring best when able to dovetail with the brutish Bosnian, while also afforded the security of Fernando and Fernandinho, and in many respects Pellegrini has been forced into using a more Europe-friendly, less open formation.

Where would City be without Aguero? Probably struggling, and certainly staring down the barrel of a Europa League shaped-gun. But, equally, where would they have been last season without Dzeko? Probably not title winners. It is a major blow for City to be without their top scorer, but they have been able to rely on Dzeko in the past and must do so again; starting against Roma.