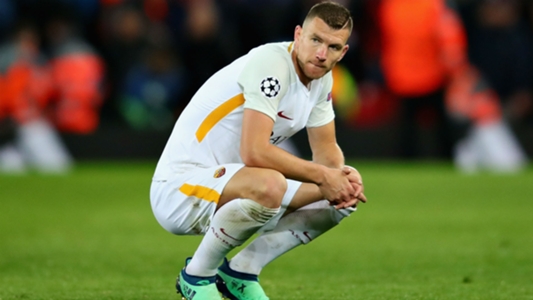 Eusebio Di Francesco is looking for Edin Dzeko to inspire a Roma turnaround in the Champions League semi-final second leg against Liverpool, hoping he can be the Serie A club’s answer to Mohamed Salah.

Liverpool ran out 5-2 winners at Anfield in the first leg, with Salah starring against his old club with a brace, though their concession of two late goals gives Roma a glimmer of hope ahead of the return fixture in Rome.

As such, a 3-0 win for Roma will be enough for them to qualify for the final, and they can take encouragement from the fact they defeated Barcelona by the same scoreline after losing 4-1 in their first meeting in the quarter-final.

And Di Francesco is looking to Dzeko to lead from the front, just as he did against Barca, with Roma aiming to produce another unlikely turnaround.

“All the players need to feel responsible and be pleased about that [responsibility],” Di Francesco told reporters in his pre-match news conference.

“As coach, I’m pleased to have this responsibility, but the players are the ones doing it on the pitch.

“Even more so with Dzeko – I hope he can be our Salah from the first leg, so he can pull things back and determine a great comeback. A player of his quality, ability – it’s right that he has this responsibility.”

But Eusebio Di Francesco has high hopes that Edin Dzeko can spark a revival. #RomaLiverpool pic.twitter.com/xRO6mZsukx
— Omnisport (@OmnisportNews) May 1, 2018

Roma are yet to concede a goal at home in the Champions League this season and while they face an uphill task to progress, Di Francesco believes the club’s supporters can play a major part in helping the team complete “another miracle” in Europe.

“The fact we’ve conceded so few chances to opponents at home in Europe is due to our support. We’ve only really struggled against Atletico Madrid. Since then, we’ve managed to contain, and I hope we see the same tomorrow [Wednesday].

Di Francesco: “At home in Europe this season we’ve only really struggled against Atletico Madrid. Since then we’ve managed to contain our opponents and I hope it’s the same tomorrow. The passion of our fans should give us an extra push.”
#ASRoma#UCL#RomaLFCpic.twitter.com/RoFQWfDfH8
— AS Roma English (@ASRomaEN) May 1, 2018

“Repeating is always difficult, but we have the right mentality and our supporters can help us pull off another miracle.”