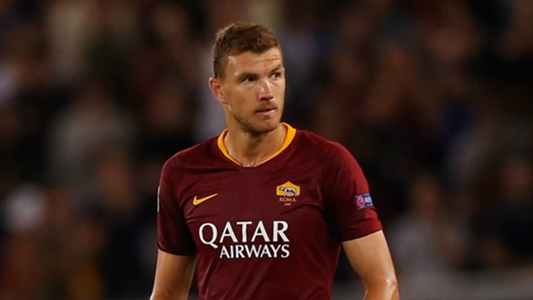 Edin Dzeko said Roma were yet to hit their best form despite scoring a hat-trick in a rampant 5-0 victory over Viktoria Plzen in the Champions League.

The Bosnian striker gave Roma the lead after just three minutes at Stadio Olimpico before doubling their advantage on 40 minutes and wrapping up the win with his third in second-half stoppage-time.

Cengiz Under and Justin Kluivert were also on the scoresheet as Roma extended their winning streak to three matches, but Dzeko said there was more to come from Eusebio Di Francesco’s side.

“We didn’t start the season well as a team,” Dzeko, who went into the game with just one goal to his name this season, told O2 TV.

“Obviously I did not score as many goals as I wanted.

“Today it was a good game for me, for the team. We just have to continue like this because I think this is not our maximum.

“We can do much better.”

Roma went over a month without a victory earlier in the season, losing 3-0 to Real Madrid in their Champions League Group G opener in the process, but recovered to beat Frosinone 4-0 before claiming the honours in the Rome derby against Lazio, winning 3-1 at home.

The victory over Plzen means that over their last three contests, all home games, Roma have scored 12 goals and conceded just one, and Di Francesco told UEFA.com: “We wanted this win and we won it convincingly.

“We conceded very little and wanted to get some continuity in our results.

“It’s never easy to win in the Champions League, but today we proved we were stronger than our opponents.”