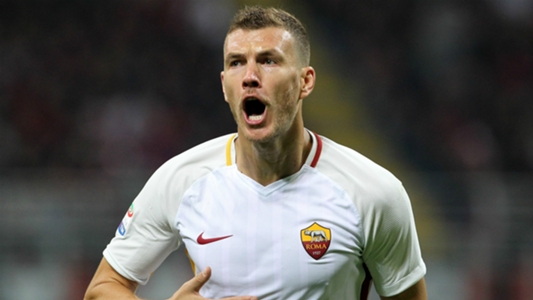 Roma boss Eusebio Di Francesco plans to start Edin Dzeko in Wednesday’s clash with Sampdoria, despite reports of a transfer bid from Chelsea.

The Premier League champions are said to be keen on a double swoop for Roma duo Dzeko and Emerson Palmieri in a deal that will reportedly cost at least £45 million.

Despite the uncertainty over the Bosnia-Herzegovina striker’s future, Di Francesco plans to use him in the Serie A meeting at the Stadio Luigi Ferraris.

“As things stand, he will start, although we’ll have to make some observations about his mental state,” he told a news conference.

“I wanted to leave him in peace, at least until today. I’ll talk to him but at the moment I’m counting on him. After that, we’ll decide together.

“It’s right for a Roma player to be able to just play and then we’ll assess the other aspects.”

When asked how Roma would look to replace Dzeko if he returns to England, Di Francesco replied: “We’re talking about something that doesn’t exist.

“Obviously, this sort of assessment has to be made. We have players who can play as the centre-forward but, right now, I have to believe that my first choice is Dzeko.”

Chelsea boss Antonio Conte is eager to sign a forward who can operate as “a point of reference” for his side, with the club having surprisingly been linked with the likes of Peter Crouch and Ashley Barnes.

Dzeko has enjoyed a strong career in Italy’s top flight since leaving Manchester City in 2015 and has scored nine goals in 20 appearances this season.

Emerson, meanwhile, is reported to have agreed a contract with Chelsea and will compete with Marcos Alonso for a spot a left-wing-back if he completes a move to Stamford Bridge.

The potential loss of two key players is likely to raise further question marks over the efforts of director of football Monchi, who sanctioned the sales of Mohamed Salah, Antonio Rudiger and Leandro Paredes in the previous transfer window.