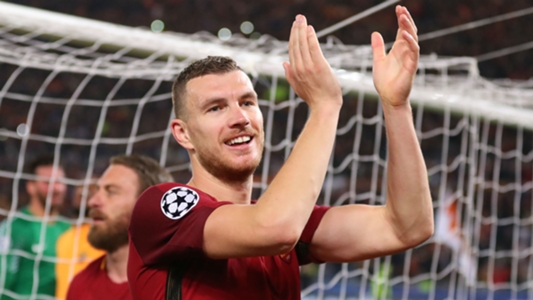 Roma forward Edin Dzeko joked that he and the club were glad to have turned down a January transfer to Chelsea as it meant he could fire the Serie A side into the Champions League semi-finals.

Former Manchester City man Dzeko delivered a complete centre-forward performance on Tuesday, scoring the opener – to add to his crucial away goal at Camp Nou – and winning the penalty for the second.

The Giallorossi are now preparing for a first European Cup semi-final since the 1983-84 season and Dzeko is delighted to be a part of it.

“It wasn’t easy, but I stayed here and am very happy to be here,” he said. “I think the club is glad, too. Let’s not talk about [the move]. Money doesn’t matter

“This was the best, but even better may well be yet to come. It proved we can play against anyone, as Barcelona are such a strong side. We put three goals past them and could have had more.

“I have never seen Barcelona struggle so much. We pressed them constantly from the first minute.”

Asked how far Roma can go, Dzeko responded: “To the final, hopefully.

“Nobody believed in us and we have reached the semi-final for the first time in the Champions League [era]. I am very happy that I can watch the draw for the semi-finals and see my Roma there.”