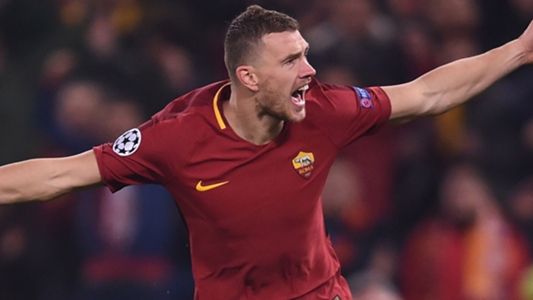 Edin Dzeko believes his decision to stay with Roma was vindicated following his match-winning display against Shakhtar Donetsk in the Champions League.

The Bosnian striker netted the winner at the Stadio Olimpico on Tuesday as Eusebio Di Francesco’s side prevailed on away goals after a 2-1 defeat in the opening leg.

Dzeko, who scored twice against Chelsea in the group-stage clash at Stamford Bridge, was heavily linked with the Blues in January as Antonio Conte sought a physical presence up front to lighten the load on Alvaro Morata.

The defending Premier League champions ultimately brought in Olivier Giroud from Arsenal and, with Chelsea facing a daunting trip to Barcelona on the back of a 1-1 draw in their last-16 tie while Roma await the quarter-final draw, Dzeko is pleased he decided to stay put.

“I did not want to go away for this game, all the season is played for games like that,” he told Mediaset Premium after Roma joined Juventus in the last eight to give Serie A two Champions League quarter-finalists for the first time in over a decade.

“We have done something that has not happened for 10 years, and being with the strongest is a source of pride.

“We play with everyone, we are among the eight strongest, so we are strong.”

Although the Serie A side were outplayed for long periods at Stadio Olimpico, the Bosnian praised the way his side did not panic before eventually finding the breakthrough.