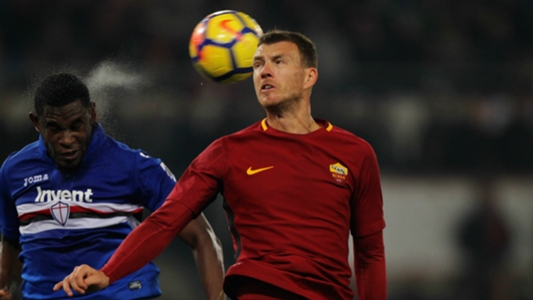 Roma head coach Eusebio Di Francesco is not losing sleep over Edin Dzeko’s future at the club amid reported interest from Chelsea, with the situation to be resolved by the time the transfer window closes.

Dzeko has emerged as a transfer target for defending Premier League champions Chelsea, who reportedly are determined to bring in support for star forward Alvaro Morata.

Roma and Chelsea are yet to reach an agreement, though interest from England is believed to have cooled on the 31-year-old striker.

After Dzeko played 90 minutes in Roma’s 1-0 loss at home to Sampdoria in Serie A on Sunday, Di Francesco said the forward’s future will become clearer by Wednesday.

“What gives me sleepless nights is the performance in the first 25-30 minutes and failing to put the ball in the net,” Di Francesco told Mediaset Premium.

“As for the rest, that will be resolved by January 31.”

Former Manchester City star Dzeko has scored 39 Serie A goals since the start of last season, including 10 this term.

Asked about Dzeko prior to Roma’s defeat in the Italian capital, director Monchi said: “Negotiations are normal when the transfer window is open. I speak to the coach every day, we are always together. It’s normal that when the window closes, we are all a little stressed, especially ahead of a game.

“We are very happy with the way the coach works and understands the movements that the club makes.

“I saw Dzeko in the locker room … so we are in the same situation as other days. We are calm and happy he is here, hope he can continue building on the last game and score another goal.

“People ask about everything except the match. I know the market makes news, but we are all concentrated on the match.”

Monchi added: “Edin’s situation is not a difficulty. Edin is here, Edin played against Sampdoria on Wednesday and he plays tonight. We are in the same situation as eight days ago. I thought when a director speaks in Italy, people believe him, but evidently I have to earn that!”