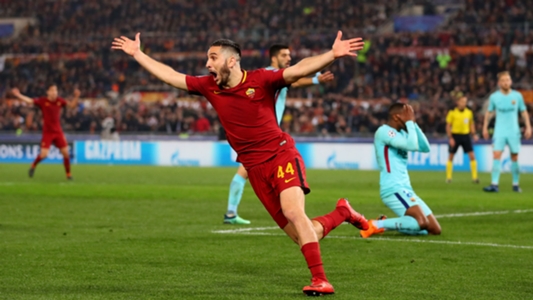 Home advantage in the second leg could be crucial for Roma in their Champions League semi-final with Liverpool, according to Rudi Voller.

The Italian club face their Premier League opponents on Tuesday at Anfield in the first leg of their last-four showdown, with the return fixture taking place at Stadio Olimpico the following week.

Voller – who featured in more games for Roma than anyone else during his illustrious playing career – feels the draw has been kind to his old club.

Eusebio Di Francesco’s side produced a stunning fightback on their own turf to knock Barcelona out in the last round.

“They are lucky that the first leg will be played in Liverpool. I know that the fans will go crazy there [in Liverpool],” Voller told Omnisport.

“But the Stadio Olimpico, with the crazy fans, is also nice. You saw against Barcelona that many things can happen there.

“They have a good chance to advance to the final.”

Roma’s astonishing recovery against Barca came after they had lost 4-1 on Spanish soil, though Voller felt that result was not a fair reflection of the game.

However, goals from Edin Dzeko and Daniele De Rossi cut the deficit down to one in the return before Kostas Manolas delivered the knockout blow, heading home in the 82nd minute.

Voller believes Dzeko will play a crucial role in deciding the outcome of the tie with Liverpool, along with goalkeeper Alisson.

“I watched the first leg [against Barcelona], therefore it [the comeback] wasn’t that big of a surprise to me as it was to many people,” the former Germany international, who is now sporting director at Bayer Leverkusen, said.

“The 3-0 result in the second leg was, of course, very extreme. Roma played very well in Barcelona and they lost unfairly 4-1. It was very deserving that they advanced.

“They are not the underdog against Liverpool with their good goalkeeper [Alisson], the defence and Edin Dzeko who is an outstanding striker.”