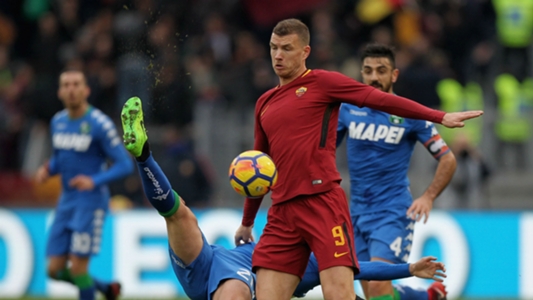 Roma coach Eusebio Di Francesco says he will continue to pick Edin Dzeko, despite rumours the striker nears an exit to Chelsea.

Chelsea’s desire to bring in a striker in January has seen Dzeko emerge as their primary target following an ankle injury to West Ham’s Andy Carroll.

The Premier League champions have been linked with a combined €50 million move for the Bosnia-Herzegovina international and team-mate Emerson Palmieri.

However, Roma have stated a deal is yet to be struck, with Goal reporting they are searching for a replacement for the striker who has scored 39 Serie A goals since the start of last season.

Di Francesco will continue to pick both of them until a move materialises, which he hopes does not come this month.

“I have complete freedom [to pick anyone], regardless of any talks that may be ongoing, which you all know more of than I do,” he told reporters prior to Roma entertaining Sampdoria on Sunday.

“Dzeko and Emerson are two players who are available to me for this game and I’ll continue to use them as and when, if I feel it is right to do so.

“Yes, I have complete freedom [to pick who I want], regardless of any talks that may be ongoing. Dzeko and Emerson will play if I think it’s the right thing to do.”
#ASRoma #RomaSamp #DiFra
https://t.co/LnkKIwHfJX
— AS Roma English (@ASRomaEN) January 27, 2018

“It’s only normal to expect that if something like this goes through, it will be dictated by Financial Fair Play regulations.

“I asked the club to sign Lionel Messi, but they told me it wasn’t possible. Look, it is not as if myself or Roma want to lose our most important players. If someone does go, it’s obviously not so we can just spend all the money we get in.

“But I’m not the one who can answer these questions; it is down to the sporting director [Monchi]. All I can say is that I have Dzeko at my disposal and I hope he remains here for the remainder of the season.

“As for anything else, I do my job and try to do it the best I can. There are some clear things that have been said to me, so either you accept those or you go home. I chose to be the coach of Roma, even during difficult times.”