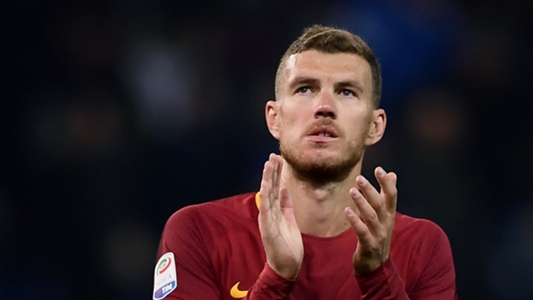 Edin Dzeko was flattered by Chelsea’s January interest but maintains he remains happy at Roma.

The Bosnia-Herzegovina striker was heavily linked with a move to Stamford Bridge during the January transfer window and, while Emerson Palmieri did make the move from the Stadio Olimpico to west London, Antonio Conte was forced to fill his striking vacancy with a deadline-day swoop for Arsenal’s Olivier Giroud.

Dzeko’s form seemingly tailed off in the aftermath of the saga but he landed a punishing blow against Napoli’s Serie A title ambitions with a brace in Roma’s impressive 4-2 win at the start of this month.

The 31-year-old was suspended for the 3-0 win over Torino last time out but is primed for action as Eusebio Di Francesco’s side welcome Shakhtar Donetsk in the last-16 of the Champions League on Tuesday, aiming to overturn a first-leg deficit.

“I am happy in Rome, with life in Rome and I don’t like to look back at media rumours,” the former Manchester City and Wolfsburg man told SportCentar in his homeland.

“They are sometimes true, sometimes just pumping for clicks. There was an offer, negotiations and I was really pleased that Chelsea wanted me.

“That is all I want to say about that, while I am enjoying in Rome.”

Dzeko’s double against Napoli also netted him a piece of history as reached the 50-goal mark in Serie A.

Having already done likewise in the Bundesliga and the Premier League, he is the first player to have brought up the landmark in three of Europe’s big five leagues.

“I am proud to be first player to score 50-plus goals in three major leagues, I didn’t even know no one managed that before me,” he added.

“Each league is specific and I’ve done it in Germany, England and Italy.”