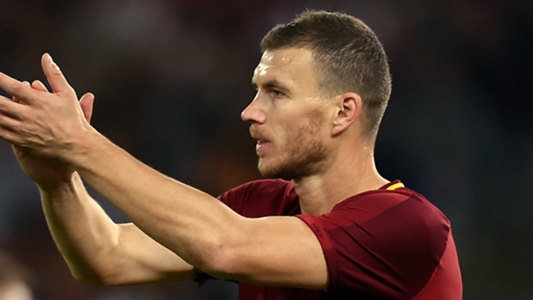 Chelsea and Roma have come to an agreement over the transfer of Edin Dzeko and Emerson Palmieri, Goal understands.

The deal, which will see Roma reportedly land €50 million for the two players plus another €10m in incentives, will be finalized upon the Blues’ completion of personal terms with Dzeko.

Back-up Chelsea striker Michy Batshuayi will not be included in the deal as it currently stands. Batshuayi has reportedly drawn interest from Sevilla and Borussia Dortmund during the January window.

Despite advancing to the Champions League knockout stages and finding themselves within three points of a top-four place in Serie A, Roma are now poised to cash in on two important players.

“Whatever will be will be,” Roma director of football Monchi said on Sunday. “I work every day to have players suitable to replace our players, my job is always to strengthen my club.

The former Wolfsburg and Manchester City striker has scored nine Serie A goals this season for the capital club, a year removed from a prolific 29-goal, nine-assist campaign in 2016-17. Despite the drop-off compared to last season, Dzeko still leads the club in league goals scored in 2017-18.

Emerson played in 24 Serie A games last season, but recovery from a cruciate ligament injury this season has limited him to just a single 15-minute appearance in the league.

However, his likely move to Chelsea looks to have freed up Kenedy for his much-awaited loan to Newcastle United. Antonio Conte previously had stated he would not let Kenedy leave without having adequate cover at the wide positions, but with Emerson set to arrive, a six-month temporary switch to the Magpies can now go through.

A similar stance has been taken with Batshuayi, and Dzeko’s arrival may free him up to move elsewhere this month, even if Roma is not his eventual destination.

The 24-year-old Batshuayi has scored two Premier League goals this season in 12 appearances and only three starts for the Blues, though he has added another two goals in four matches in the Champions League.

Batshuayi completed a €39m move to Chelsea in the 2016 summer window, but has only scored seven Premier League goals in his Blues career as he has struggled to become a fixture in Conte’s plans, with the manager conceding he may leave this month.