Edin Dzeko netted his first ever goals against Chelsea, while the struggles of Dortmund, Atletico and Napoli are bad news for Arsenal 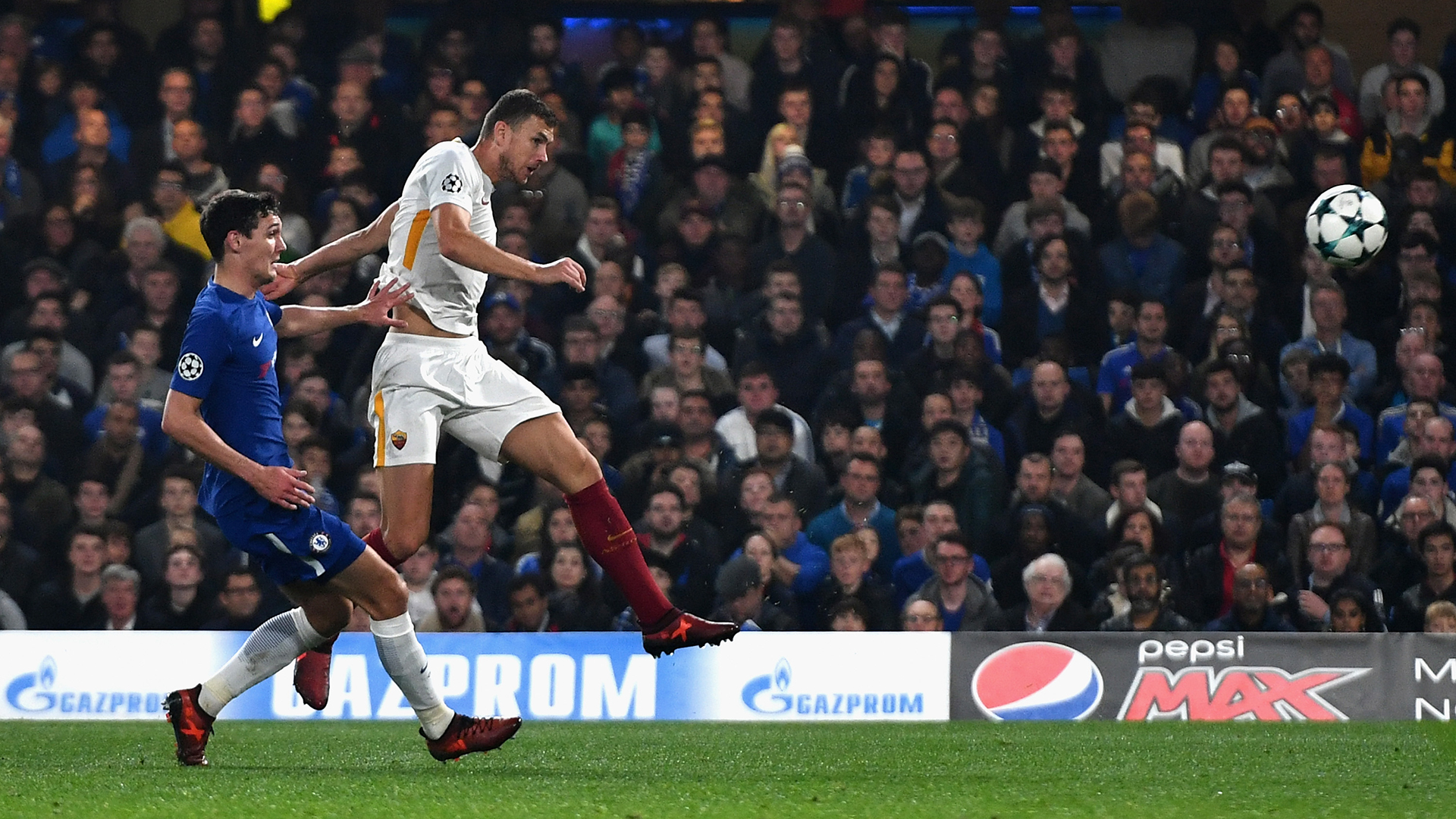 “When I was at Manchester City,” Edin Dzeko mused after Roma’s 3-3 draw at Stamford Bridge on Wednesday, “I never scored against Chelsea, but I made up for that tonight.” And how!

Dzeko struck twice in what was his 10th outing against the Blues, levelling the game with a thumping, first-time volley from a wonderful pass from deep from Federico Fazio before then heading the visitors into a 3-2 lead.

Eden Hazard salvaged a barely deserved draw for Chelsea, who looked like the away side all evening, with just 40 per cent of the ball, and the man of the match award went to the brilliant Belgian. But the night still belonged to Roma’s No.9, who was proclaimed “King Dzeko” by both Tuttosport and the Corriere dello Sport on Thursday morning.

At 31, he is in the best form his career, as underlined by his recent nomination for this year’s Ballon d’Or.

Dzeko’s double in west London has taken his Roma goals tally to 59 in just 100 games, a record made all the more remarkable given he struggled in his first season after moving to the Stadio Olimpico from Manchester City in the summer of 2015, scoring just 10 times in his first 39 appearances for the Giallorossi.

That makes it 49 goals in his past 61 appearances, which underlines just why Francesco Totti saw so little game time before his retirement.

The King is dead, Long live the King! 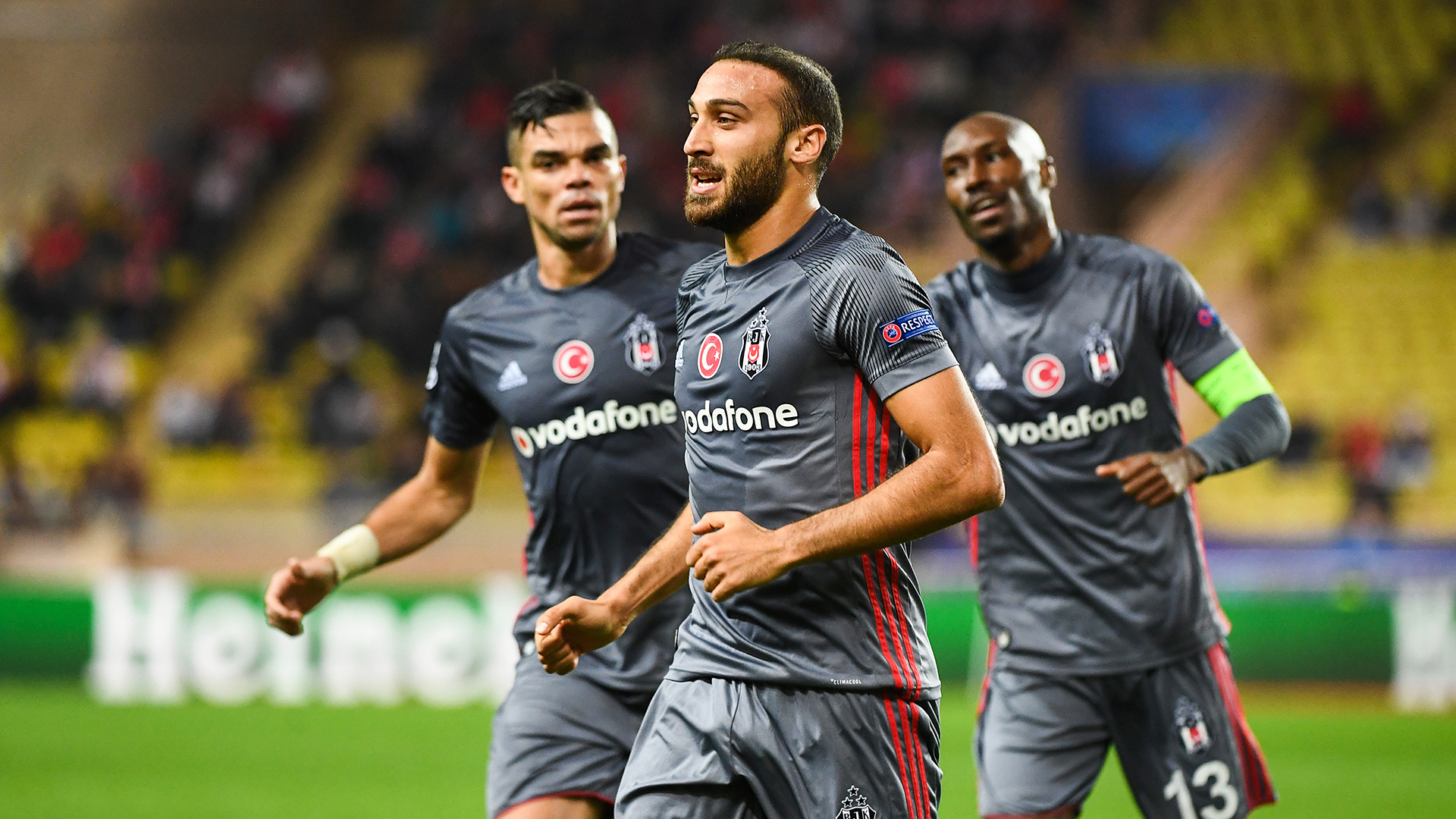 Cenk Tosun told Goal in September, “The best feeling in the world is when you see the ball hit the net. If you’re a striker, you step on the field to taste that feeling.” The Besiktas forward has certainly developed an insatiable appetite for Champions League goals over the past year.

Tosun won the tournament’s goal of the season award for his sensational scissor-kick against Benfica last November, while he kicked off the current competition by bagging the best goal of Matchday 1 – a thunderous strike from distance in a surprise 3-1 victory at Porto.

The Turkey international netted again on Tuesday, twice in fact, to earn Besiktas an impressive come-from-behind win at Monaco that means his side have a maximum nine points after three rounds of action.

“I keep training hard, both with the team and after the sessions,” the in-form Tosun said after the win at the Stade Louis II. “I want to improve what I have been doing wrong and what I could do better.”

Having been expected to finish bottom of a competitive, well-balanced group that also features RB Leipzig, Besiktas have now won three Champions League group games on the bounce for the first time in their history to leave them just one win away from a maiden appearance in the knockout stage.

Tonsun will be key to their hopes of progression because while Pepe, Ryan Babel, Alvaro Negredo and Ricardo Quaresma may be the most famous names in Senol Gunes’ squad, it is the humble but hungry centre-forward who adds real bite to the Besiktas attack. 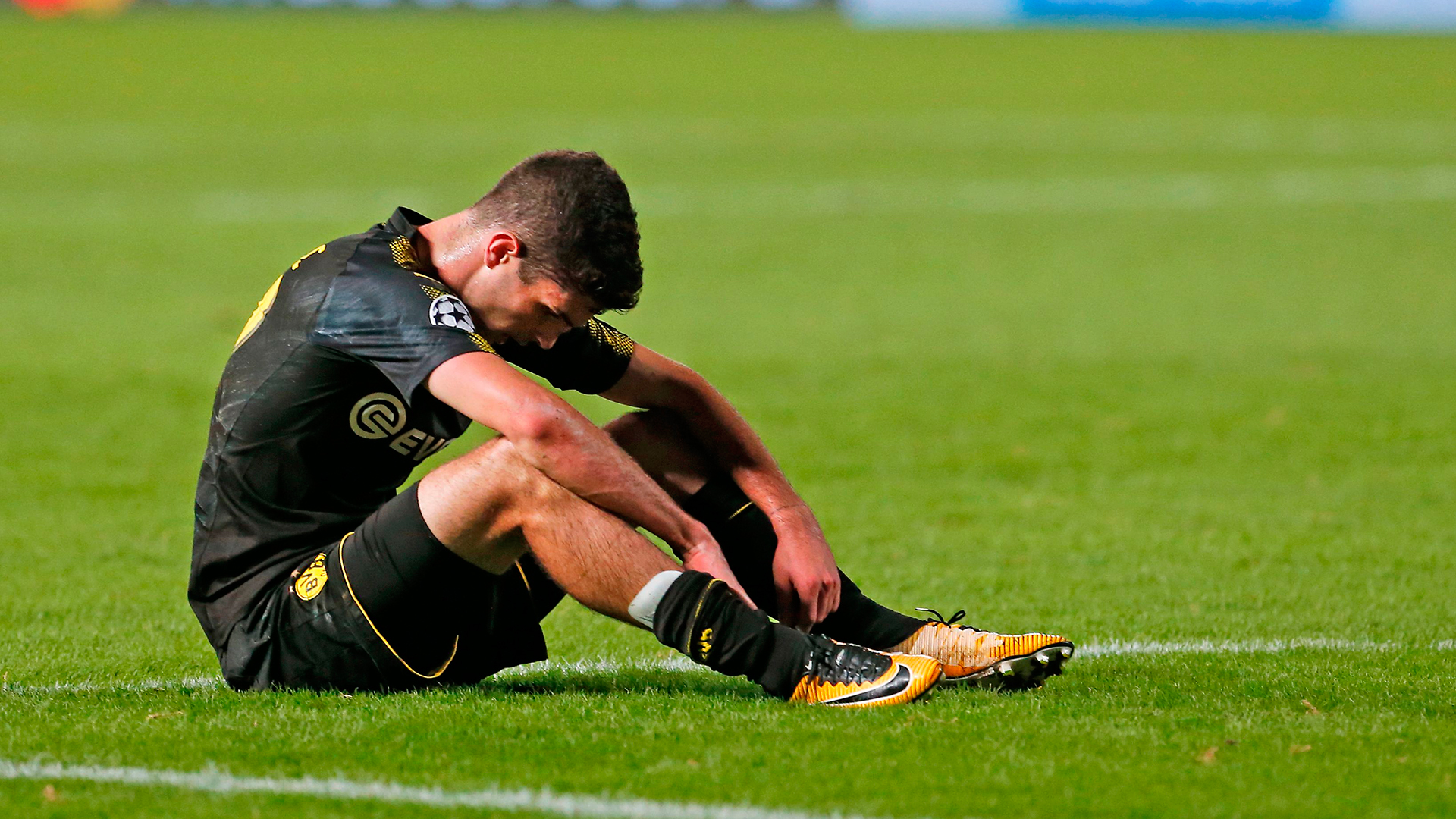 It’s not been a great few days for Borussia Dortmund boss Peter Bosz. After watching his side’s unbeaten start to the Bundesliga season come to an end at home to RB Leipzig on Saturday, the Dutchman then had to endure a dismal 1-1 draw at APOEL on Tuesday that has left BVB’s Champions League hopes in tatters.

Indeed, further bad news had arrived at full-time, when Bosz was informed moments before his post-match interview that the other game in Group H, between Real Madrid and Tottenham, had also finished level. “That 1-1 draw in Spain isn’t good for us either,” he lamented. “It wouldn’t have been good even if we’d won here.”

He wasn’t wrong there: BVB’s failure to win in Cyprus leaves them needing a minor miracle to qualify for the last 16. As it stands, Dortmund sit third in Group H, six points behind both Spurs and Madrid. The Bundesliga leaders should at least defeat APOEL at home to boost their qualification hopes but even then, they would still need to defeat Tottenham at home at Real in the Bernabeu just to have a chance of progressing.

In reality, BVB are already out and, in truth, only have themselves to blame after managing just one goal, and four shots on target (the same number as APOEL), in a game in which they had 72.6 per cent possession. Admittedly, they came close to nicking a late winner, with both Shinji Kagawa and Pierre-Emerick Aubameyang striking the woodwork in the dying minutes.

However, even a bemused Bosz admitted that his side did not warrant all three points: “We actually got weaker the longer the game went on.” He will now be hoping Dortmund’s season doesn’t follow a similar course. 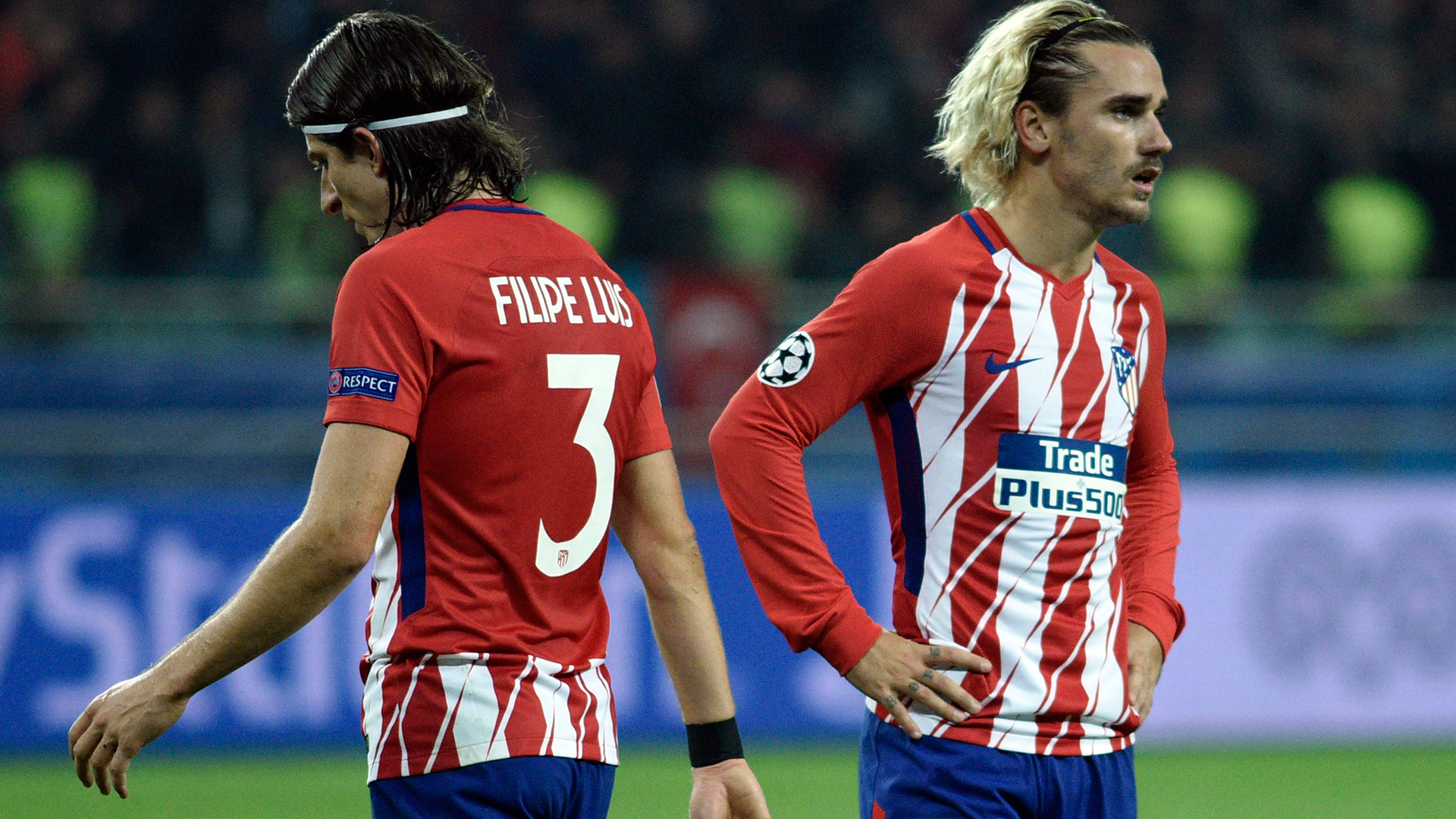 Atletico Madrid have been Champions League finalists in two of the last four seasons but based on this week’s evidence, they will be lucky to even escape the group stage this time around. Wednesday’s goalless draw in Qarabag serves as the worst result of Diego Simeone’s brilliant reign at Atletico.

Their rookie opponents had never even gained a point in the Champions League in their history and had been humiliated 6-0 by Chelsea on matchday one.

But Atletico were slow and predictable throughout the match and barely created a single chance in the second half, even when the Azerbaijanis were reduced to 10 men with 15 minutes to go. In fact, Qarabag even threatened to score on the counter-attack on a number of occasions.

Most worrying of all, though, Atletico now find themselves with a lot of work to do to qualify. With just two points from three games, they find themselves six points behind leaders Chelsea and three points shy of second-placed Roma. 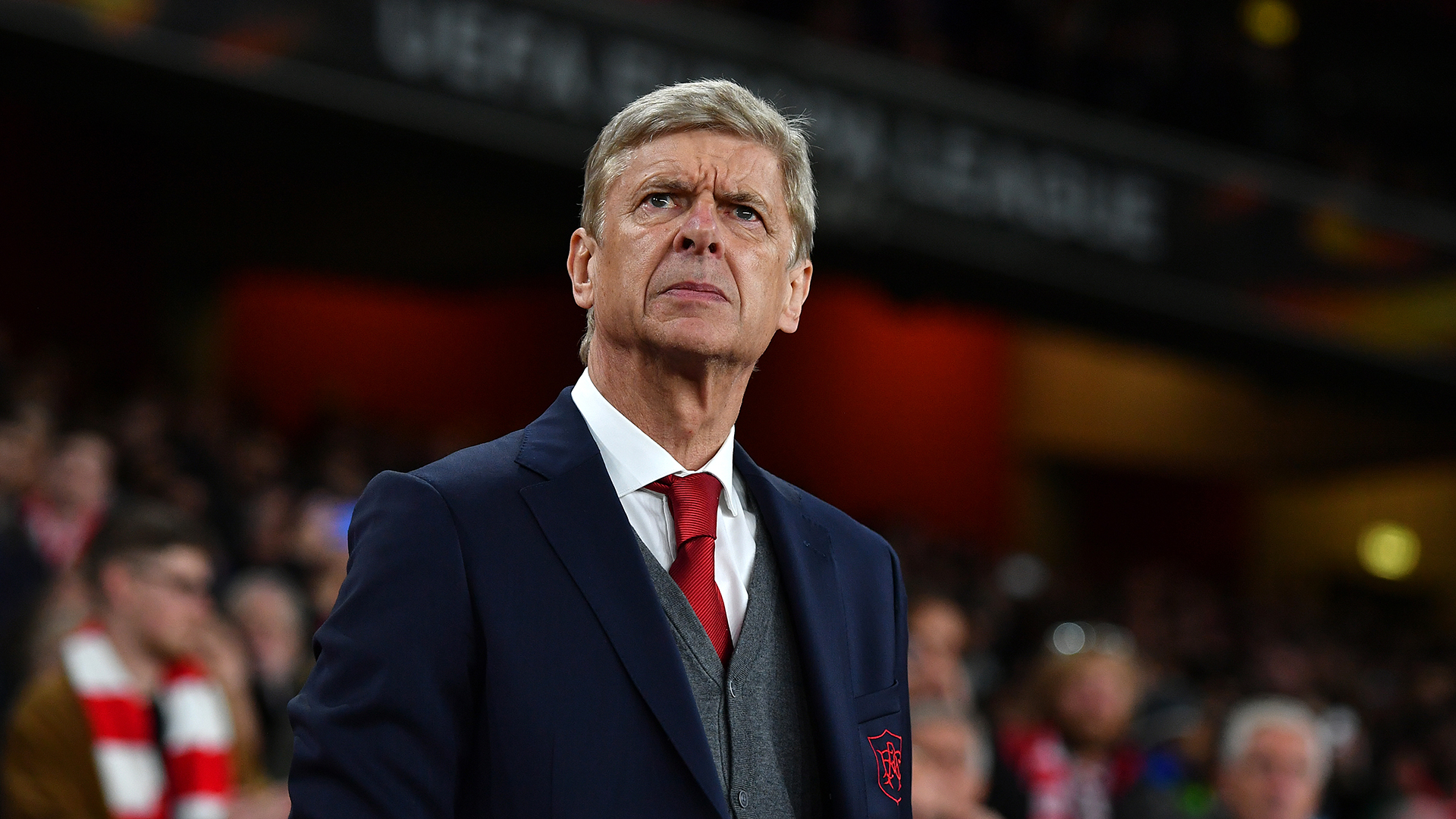 Arsenal’s diastrous failure to qualify for this season’s Champions League did have one silver lining: the opportunity for Arsene Wenger to win the first European trophy of his career and a first for Arsenal since their Cup Winners’ Cup win over Parma in 1994.

When the draw for the Europa League group stages was made, there were few teams who would have frightened Wenger. Indeed, their strongest rivals right now are Roberto Mancini’s Zenit St Petersburg, crisis-hit AC Milan and the likes of Villarreal, Lazio and Marseille.

However, this week’s Champions League results mean that the knockout phase of the Europa League is going to get a whole lot tougher for Arsenal because it’s not only the aforementioned Atletico and Dortmund who are struggling.

Serial Europa League winners Sevilla slipped from top to third in Group E after a shocking 5-1 loss at Spartak Moscow, while even an excellent Napoli side are now third-favourites to make it out of Group F after losing two of their opening three fixtures.

Should Sevilla, Atletico and the league leaders in both Germany and Italy drop down into the Europa League, it could end Arsenal’s chances of salvaging anything from what could be another miserable season in north London.