The Premier League is back with a bang, with Manchester City and Chelsea proving why they are favourites for the title with comfortable wins, while Liverpool and Tottenham also picked up narrow victories in a fascinating opening weekend.

Of course, things did not quite go to plan for Louis van Gaal, who suffered defeat in his first Premier League game as manager of Manchester United with Swansea 2-1 victors at Old Trafford, while there were also defeats for Stoke and QPR as the top flight got back up and running.

We start our Team of the Week as always in goal where Hull keeper Allan McGregor gets the nod after keeping a clean sheet at Loftus Road, as the Tigers picked up a 1-0 victory against QPR. The Scot faced 19 shots in the Hull goal but could not be beaten and also denied Charlie Austin from the penalty spot with a fine save.

In defence, Laurent Koscielny inspired Arsenal to a comeback victory against Crystal Palace, heading home the equaliser as the Gunners won 2-1 and keeping strikers Fraizer Campbell and Marouane Chamakh quiet. The Arsenal defender also enjoyed a pass success rate of 97 per cent and barely put a foot wrong all afternoon.

Also lining up in defence is Vincent Kompany who was at his best as the champions overcame a tricky first game, beating a new-look Newcastle 2-0 at St James’ Park. The Belgium international conceded just two fouls against Alan Pardew’s side as Manuel Pellegrini’s men began the season where they left off.

Aston Villa’s Ron Vlaar is the third centre-back in our line-up as we favour a 3-5-2. The Netherlands international showed why he has become so in-demand with a dominant display, particularly a last-ditch block to deny Bojan as Villa won 1-0 at Stoke.

Into midfield and Nathan Dyer gets the nod after a fine afternoon tormenting Manchester United on their home turf. The Swansea winger gave Ashley Young and Tyler Blackett plenty to think about as he helped Garry Monk’s side inflict an opening day defeat on the Red Devils for the first time since 1972.

Next up is Southampton youngster James Ward-Prowse who caught the eye at Anfield, putting in a fine display as the Saints narrowly lost 2-1 to Liverpool.

Alongside the teenager is our star man, Cesc Fabregas, who made his return to Premier League action in Chelsea’s 3-1 victory over Burnley. The former Barcelona midfielder sparkled at Turf Moor, setting up two goals, including a sublime touch for Andre Schurrle to make it 2-1. Overall the midfielder enjoyed a pass success rate of 87% and completed 76 successful passes. 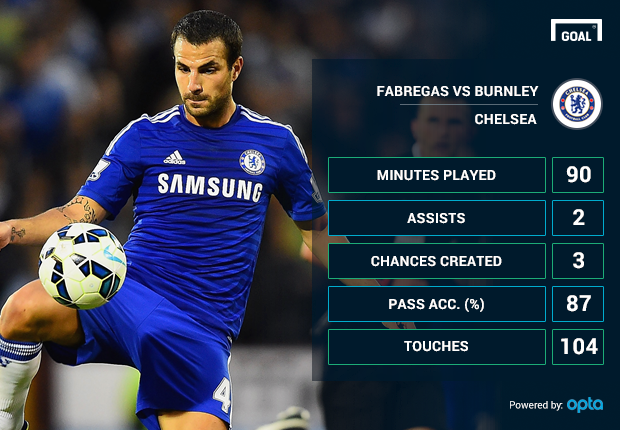 Mile Jedinak features despite Crystal Palace’s narrow defeat to Arsenal. The Australian was a tireless presence in midfield, winning six out of his nine tackles and using the ball well to release his side’s attackers and give Arsenal plenty to think about.

Raheem Sterling scored the opener for Liverpool with a great run and composed finish and caused the Saints problems all afternoon with his pace. The youngster enjoyed 71 touches throughout the match, completing five dribbles and having four shots on goal.

Up front, Edin Dzeko features after a fine display as Manchester City beat Newcastle. The striker set up David Silva brilliantly for the first goal with a delightful backheel and also managed three shots on goal in a strong showing.

Completing our line-up is Diego Costa, who took just 17 minutes to open his Premier League account against Burnley. The Spain international was a constant threat and was unlucky not to have been awarded a penalty after being brought down after going around goalkeeper Tom Heaton.

Want to keep track of all the key statistics in Europe’s top five leagues? Keep an eye out for the Huawei European Team Ranking, due to be launched in the first week of September.