Last week’s 3-0 Champions League loss to Real Madrid gave Borussia Dortmund a grim glimpse of life after Robert Lewandowski. The Polish striker, who has already agreed to join rivals Bayern Munich this summer on a Bosman transfer, was suspended for the trip to the Santiago Bernabeu and was sorely missed as his side crashed to a disheartening defeat.

Marco Reus was shunted up to lead the line for BVB, made to play an unnatural role – and the effects were obvious. As Jurgen Klopp’s side desperately searched for an away goal the coach sent on Julian Schieber, who was utterly unable to fill the void.

It leaves Dortmund at a crossroads ahead of next season. Lewandowski has become irreplaceble over the years as he has blossomed into one of the world’s best strikers.

Club CEO Hans-Joachim Watzke has in the past hinted that Reus and Pierre-Emerick Aubameyang could be moved up front permanently. “Both played as strikers at their old clubs,” he said in December.

However, last week’s result in Spain highlighted the need to spend big in the summer, so who are the candidates to fill Lewandowski’s sizeable shoes?

The overwhelming favourite to become the next BVB striker is Hertha Berlin forward Adrian Ramos. The Colombian has been a revelation since the capital club returned to the Bundesliga, scoring 19 goals in his 26 games, including one as they came from behind to beat Dortmund back in December.

The 28-year-old’s agent has already confirmed that his client is likely to move to Signal Iduna Park, saying: “There is a big chance that Adrian will join Dortmund.” However, despite his heroics in front of goal this term, there is a sense that the Champions League quarter-finalists need more.

Even with Lewandowski, they have been unable to compete with Bayern in the long term and Ramos would be a significant downgrade, given he has no Champions League experience.

One name long linked with BVB is Manchester City striker Edin Dzeko. The Bosnian has been told that he can leave the Etihad Stadium in the summer and Dortmund are one of the clubs monitoring his situation. They will, however, have to see off competition from Inter, who are vocal admirers of the player.

He may lack Lewandowski’s tireless running but is a seasoned performer, having won both the Bundesliga with Wolfsburg and the Premier League with City. He would be an expensive option both in terms of transfer fee and salary but is a proven goalscorer.

However, former Dortmund defender Christoph Metzelder has his doubts over whether Dzeko is the right man for Dortmund. “The name of Edin Dzeko gets mentioned often and he knows the Bundesliga perfectly,” the ex-Germany international told Goal. “But he would surely be an expensive signing and there is the slight question mark over whether he is ready for Jurgen Klopp’s intensive running style.

“Adrian Ramos is the central player at Hertha and he also is their first defender. He gets the ball in every situation and he is able to control it. He is quick and a great finisher. For me, he fits the requirements.

“But he is not on Lewandowski’s level. Nevertheless, I think they will buy another centre forward. They need somebody else up front.”

Another player who has reportedly caught Klopp’s eye is Ciro Immobile of Torino, a striker who is co-owned by Juventus. The 24-year-old has scored 18 goals in 28 games for Giampiero Ventura’s men and his agent has confirmed that BVB have been following the forward’s form closely.

“Their interest shows how big my player is becoming,” Marco Sommella said in February. “Dortmund are Champions League runners-up and they’re now looking for someone who can replace a top player like Lewandowski.” 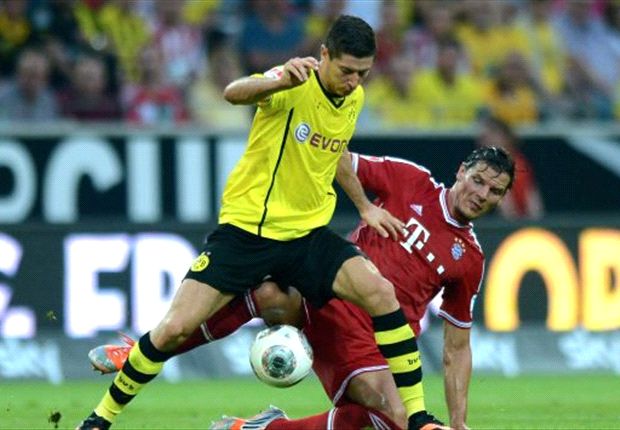 Switching Sides | Lewandowski will join Bayern for free in the summer

Then, of course, there is the wildcard option. Dortmund plucked Lewandowski from Lech Poznan and moulded him into one of the best strikers in Europe and Klopp has spoken of his confidence of doing the same again, saying: “Robert has developed so much, but others can and will do that at this club.”

To that end, they have been scouring the Belgian leagues to keep an eye on Michy Batshuayi, who is enjoying a breakthrough season with Standard Liege, and Anderlecht’s 19-year-old Aleksandar Mitrovic, whose agent has claimed interest from Signal Iduna Park.

Though there would be convenient parallels with Lewandowski, who himself arrived at the club as an unknown, Dortmund are in a different place these days as Champions League regulars and Bundesliga contenders.

To pluck a youngster, however talented, and expect him to fill in for the Pole single-handedly would be putting a lot of pressure on a young player’s shoulders.

Whichever route Dortmund choose to go down when it comes to rebuilding this summer, they will have to think long and hard before making an investment. But, if they play their cards well, they may just be able to replace Lewandowski.